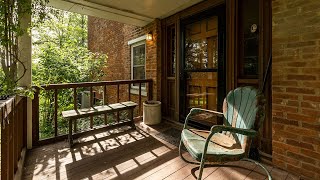 SOLD – The video is a must see as a Historian walks you through this 170 year historical home!

VERNACULAR 2 bedroom, 1.5 bath Brick Style ANTEBELLUM Home was built in the late 1840’s & is nestled on 3 Acres outside the city limits of Athens. It’s a UNIQUE & RARE example of Pre-Civil War IL. architecture.

The house was built in the late 1840s by Henry Jordan, who owned an 80-acre parcel with his wife Kissiah. It is of a vernacular brick style that was popular in Menard County before the Civil War. However, most antebellum houses such as this have been demolished in the last 50 years and only a few examples still remain. This house is a unique and rare example of pre-Civil War Illinois architecture.

The two-story brick dwelling constructed during the late 1840s was the second house built on the property. The first was a small log dwelling located in what is now the backyard. Part of its remains were excavated archaeologically in the 1990s.

The house is associated with Abraham Lincoln’s early life in central Illinois. Henry Jordan’s father, James (who lived next door) was acquainted with Abraham Lincoln. James was known as a heavy drinker, and would walk to the village of New Salem (now a State Historic Site nine miles to the northwest) to drink. He features in a Lincoln-related tale, where he was put into a barrel and rolled down a steep hill by local ruffians as Lincoln looked on. The road in front of the house is known as the “Lincoln Post Road”, and was surveyed by Lincoln in the 1830s.

The 3-acre parcel includes a large two-story barn, a heated outbuilding recently converted into a home office, and a one car garage. The 30’x30’ barn also dates to circa 1850 and is constructed of massive hand hewn oak timbers. It was remodeled in the early 1900s and has a complete concrete floor and foundation. It was sided in unfinished cedar and roofed in “Grand Rib” steel in 1995.

The two-bedroom, one-and-a-half bath house features many original fixtures including two mantle pieces, built in walnut cabinetry, tall beaded baseboard, hardwood door trim, original wide plank oak flooring, and mid-19th century pine flooring. Most of the doors in the house date to the 1850s and were salvaged from nearby homes that have been demolished.

The kitchen of the house is a brick addition constructed in 1990, using appropriate pre-1870 salvaged brick. Two of its interior walls feature the exposed brick of what was once the exterior of the house. The kitchen was completely remodeled in 2011 and includes Corian countertops and an island sink.

The full bath was remodeled in 2010, and features an early 20th century pedestal sink salvaged in St. Louis, and a deep, Greek-style bath tub with ceramic tile.

A new septic system was installed in 2006 and the house is served by city water and natural gas.

The house and its 3-acre property are outside of city limits in rural Menard County. Much of the property is wooded and includes a number of walking trails. The property features several ornamental gardens as well as a small vegetable garden.